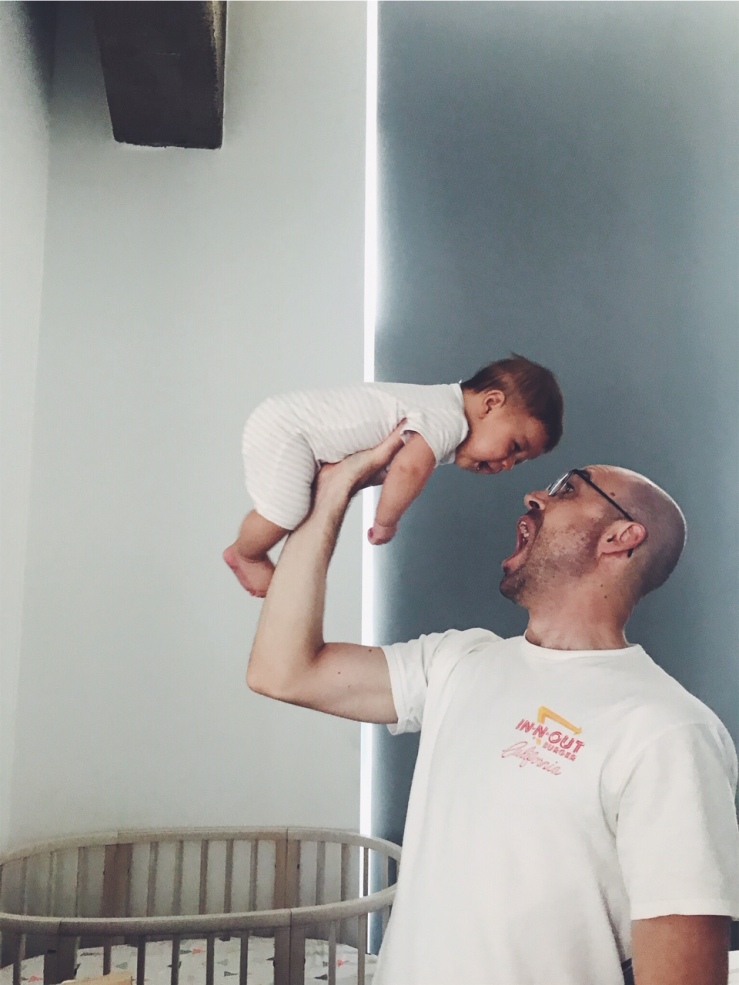 On Monday this week, Tom turned thirty-eight. A year and three months have passed since I last wrote Tom’s Thursday Thoughts, though there wasn’t much writing, just the last few rather bittersweet photos I’d taken of Tom the day we left New York.

Since then, Tom has moved to a different country, gotten a new job, turned thirty-seven then thirty-eight, and most importantly, become a father in the time of apocalyptic bushfires and plague. So the break in Tom’s Thursday Thoughts has been a real shame. Many Thursdays have passed and Tom never, not once from the East to West coasts of the United States and down to the shores of Sydney, Australia did Tom stop having thoughts.

Some of the thoughts are ones you’ve heard before: Life in Sydney is great and you should think about moving down here. Work here, no matter how well balanced with life, will always be the “salt-mines”. Pubs are always a good idea, especially the Coogee Bay Hotel. And, if you’ve seen or heard from Tom since the era of Mr. Baby, well, “Isn’t he such a great little guy?”

They say parenthood changes you, but I contend that it doesn’t, not a sea change anyway, but the subtle dialing up and down of traits that were always there, like Photoshop adjustments to a picture. More light here, more shadow there. Certain details sharpen while others blur.

Fatherhood hasn’t changed Tom at his core. He’s still as un-PC as ever (“It’s gonna really fucking suck to have to watch what I say once the baby starts understanding shit.”), needs to be cajoled to eat his vegetables (“Gross.”), and plans to invest heavily in a gaming computer to see himself through quarantine, even though I can’t imagine where he thinks he’ll find the time (“Oh don’t worry Beef. If there’s time, I’m gonna find it.”). But becoming a parent has plainly brought out Tom’s more cautious side. Most notably – something many people, parents or not, can relate to in times of global pandemics – a heightened awareness of our mortality.

Prior to having a baby, Tom and I hardly paid attention to our health. I was known to take the odd supplement, but we barely went to the doctor – mostly because healthcare in America sucks and there wasn’t much wrong with us. If something seemed off, I went straight to Dr. Google and would occasionally become fretful about the possibility of brain cancer or some other very bad illness.

“Probably not, but I think you might be suffering from retardation,” was usually Tom’s response.

I would disagree, but in the end it was always nothing.

Now, life with Mr. Baby. Now, life in the time of Coronavirus.

Though coronavirus has indefinitely cancelled the possibility of international travel, before Coronavirus I was prepared to take the baby abroad as early as three months old. But for Tom, that was never an option thanks to another well-known virus.

“We’re not going anywhere until he’s gotten his measles vaccinations.”

This surprised me. We both knew plenty of parents who’ve taken their babies abroad as early as two months for various reasons (six months is the earliest a measles vaccination can be administered), one of which was to attend our wedding in Taipei. Tom knew these babies were young, but he never gave any indication that he thought traveling with them was a bad idea. But then again, he had also never had a baby.

By my third trimester I was already feeling stir crazy and imagined how wonderful it would be to go to Taiwan for Chinese New Year in January and back to the States for my cousin’s wedding at the end of March. The baby would have been two and three months for these events.

“They might be low,” said Tom, “but why take that chance.”

We argued. I called him an overprotective worrywart and stick-in-the-mud, but after reading about various growing measles outbreaks in the U.S. (mostly in the very places we’d visit: California and NYC), I ceded the point to Tom. If the baby got measles – which is possible even here because, unfortunately, anti-vaxxers are a global scourge, I knew that neither Tom nor I (and probably the baby) would ever forgive me. We would stay put until the baby was at least six months.

And I read about Coronavirus too, if only in passing on the way down to Life and Style headlines, but not to the extent that Tom had. One day, a few weeks before Australia closed things down and things got very very bad in the States, Tom was reading his phone when he suddenly looked at me.

“I think we should do some stocking up. Just in case things get bad with this virus that’s going around.”

“Really? What are the chances,” I said again.

It was late February and the situation in Italy hadn’t yet become knowingly dire. But even so, my knowledge of the virus was that it was far away and all but irrelevant to my life. I also wasn’t reading the news as much as I was obsessively devouring blogs about baby sleep.

He showed me some charts which I glanced at distractedly, and explained his reasoning based on the available data. I still didn’t fully understand why he was worried about this at all. Wasn’t it more important to figure out why our baby couldn’t sleep through the night? And if there was some crazy virus we needed to worry about, how the hell were we going to fight it off if we were sleep deprived?

Tom admitted he could very well be overreacting.

“But what do we have to lose?” he said. “Worse case we have some extra food and supplies around the house.”

In any event, I never turn down a trip to Costco so stock up we did.

A week later things in Italy swiftly deteriorated and my friend Alice flew back to Sydney from visiting family in France, where things were threatening to go the way of Italy. We met up for coffee with our babies in tow and even hugged hello.

“You shouldn’t have done that,” Tom said.

The next day, the United States banned all flights from France. A day after that, Tom’s company told employees to work from home, about a week ahead of many other organizations in the area. Tom started to press the elevator button with his key and reminded me to wash my hands every time we came home and after we touched packages and groceries.

But on the streets it seemed to be business as usual. Restaurants, cafes, and gyms stayed open. At Tom’s insistence however, I reluctantly cancelled a Mum and Bubs yoga class I’d been looking forward to. Even more reluctantly, I told our part-time nanny, a friendly girl from Taiwan on a working holiday visa, to stop coming. This pained me the most as she was really starting to get the hang of looking after the baby for longer periods, which meant I could finally leave the house for a few hours without him.

But again, why take the chance.

And then the lockdown came, a full three weeks after the day Tom put his phone down and looked at me.

We’re now entering our fifth week of quarantine. Life at home is weirdly calm and boring compared to the catastrophes being detailed in the news and in hospitals. The days are beginning to blend together, but at least we are safe, healthy and at home. And of course, despite our early-ish preparations, we still could have contracted the virus any number of ways or worse, unknowingly passed it to others. But we were lucky we didn’t. I’d like to think part of that had to do with one of us paying attention to what was happening.

Anyway happy birthday to Tom, now thirty-eight and, forever after this, a father. 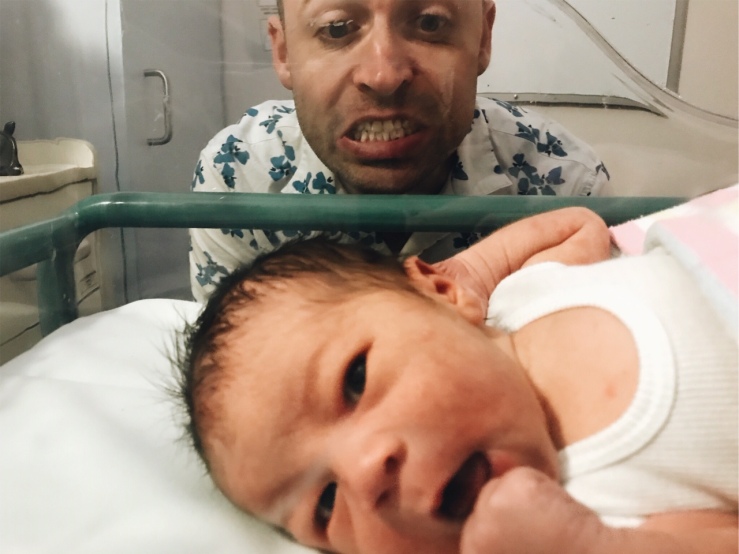 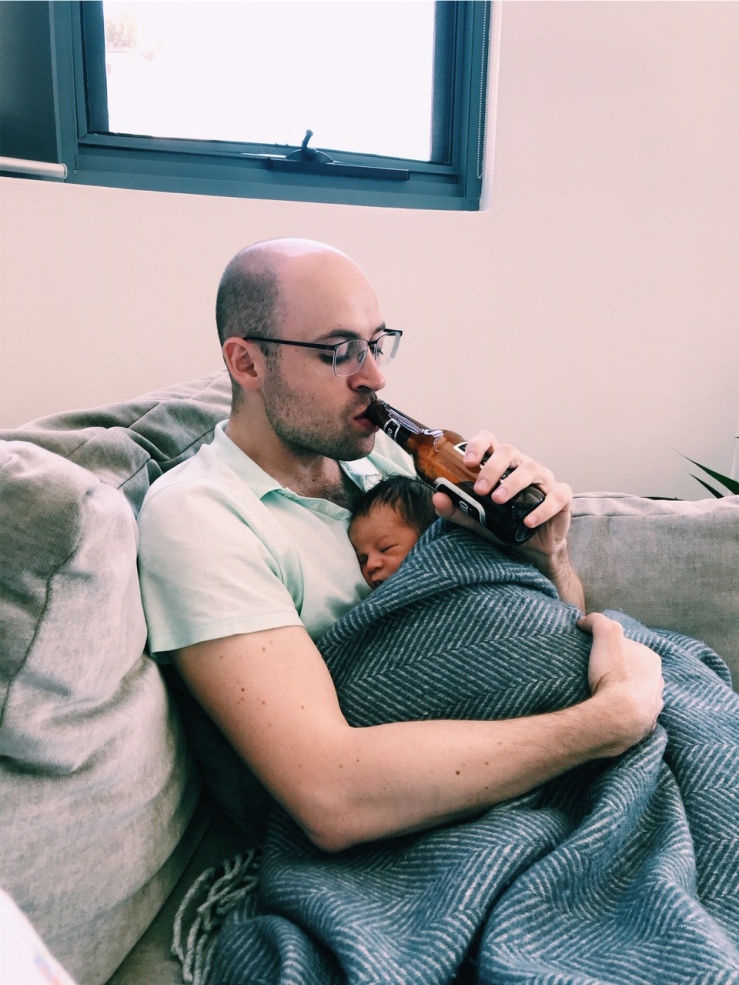 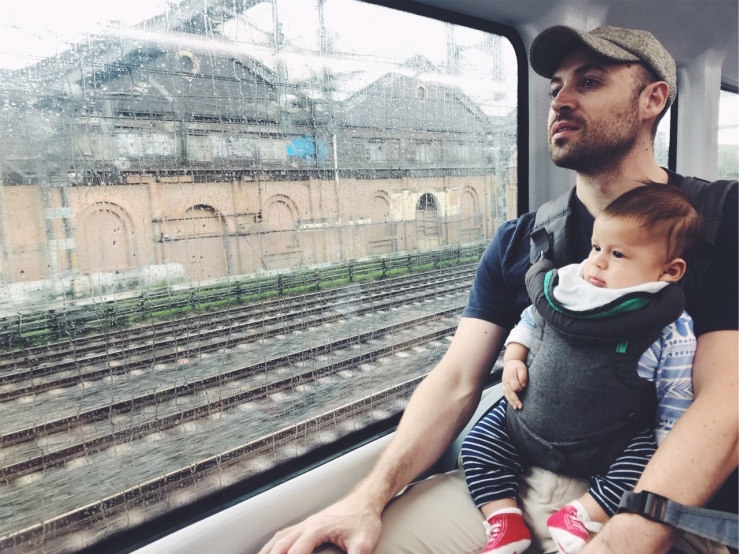 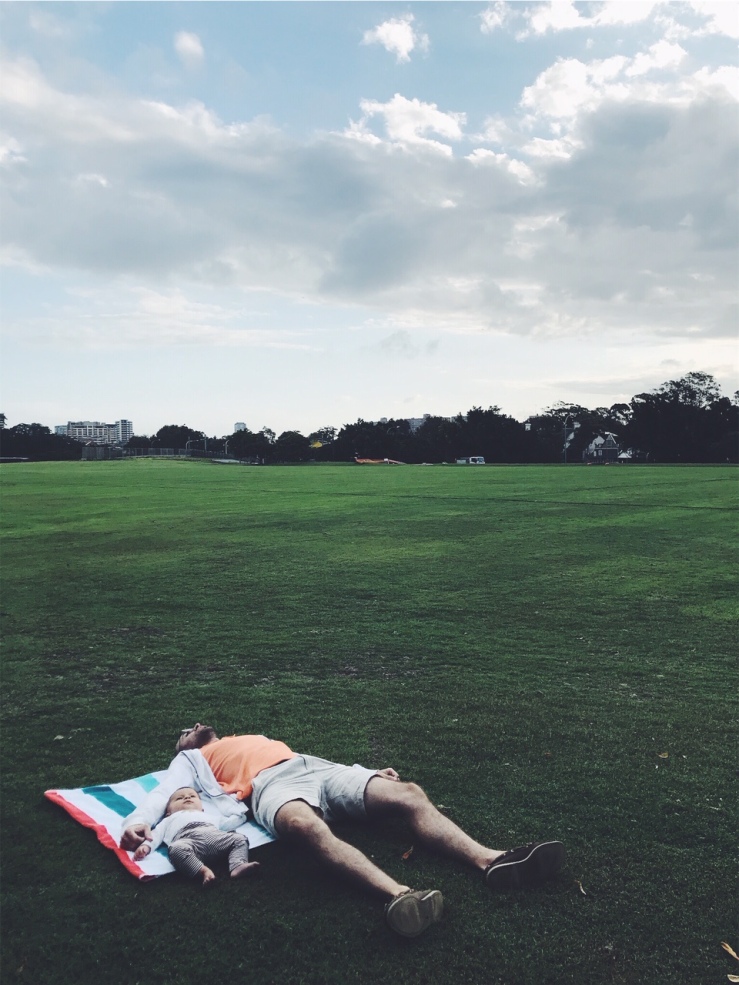