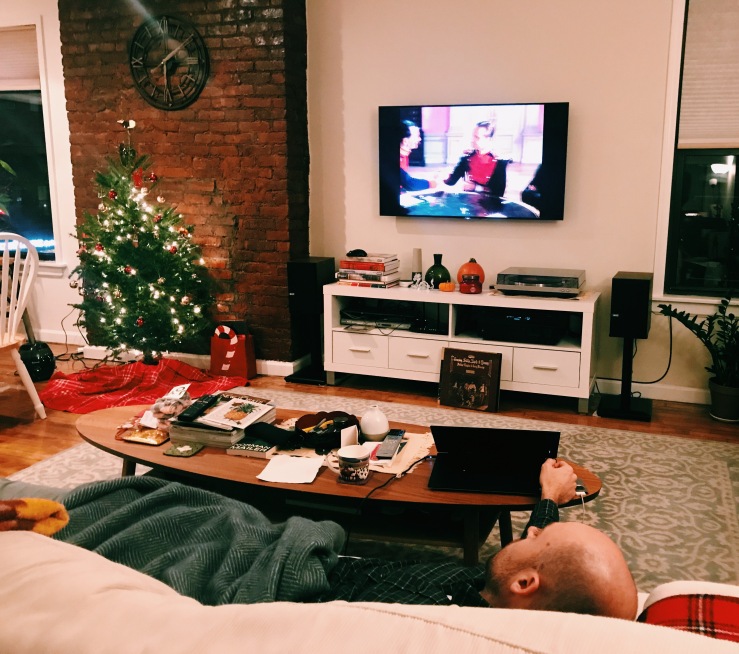 Tom is all about cosiness. And retirement. He works so he can afford to do cosy things both in New York and all around the world. If he were single and on Tinder, I imagine he’d list his interests as “Beer, bitches, and cosiness. In front of a fireplace. Or on a boat.”

Very few people know that at one point, Tom had aspirations for a digital presence. Several years back, inspired by his devotion to cosiness, he bought the domain name http://www.cosymoments.com. He chose the British spelling because when it comes to cosiness, the Brits know what’s up.

“What were you going to do with that domain name again?” I asked him while writing this. It was last Saturday, on the evening of New York’s first snow. 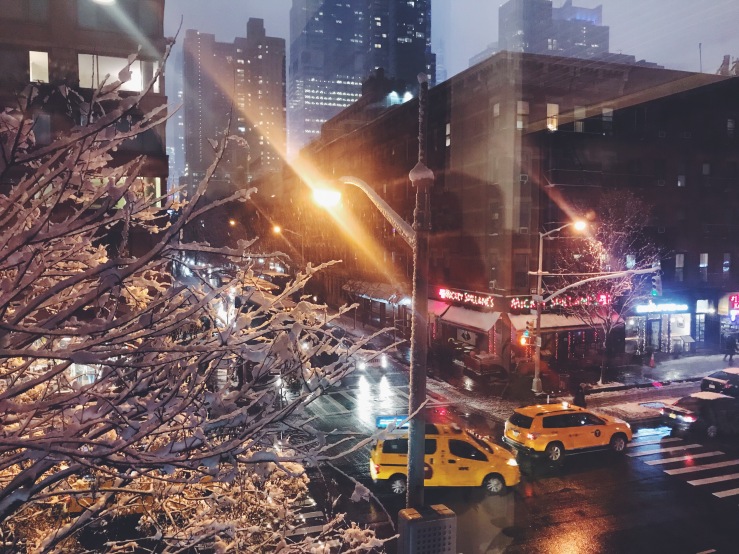 He was making a bacon grilled cheese sandwich, the cosiest dinner he could come up with that evening, given the ingredients we had in the house. He was in the middle of watching The Life and Death of Colonel Blimp, even though I had requested another episode of the French crime drama Engrenages (Spiral), because the latter, to Tom, was too scary to be cosy.

The Life and Death of Colonel Blimp, said Tom, was the cosier film.

Indeed it was. So cosy that I fell asleep. We had spent the day brunching with my cousin C at the newly opened Friedman’s in the Edison Hotel (a touristy but surprisingly tasty place) and then the afternoon chatting with her in our toasty “great room,” drinking mugs of hot tea while outside the snow fell and fell. Kindly, it didn’t stick.

The cosiness of the day wrapped itself around me like a non-scratchy flannel blanket. By the time C left the day began to darken and we settled on the couch for Colonel Blimp. A delicious wave of irresistible fatigue washed over me. I was asleep before the opening scene was over.

When I woke, it was because Tom had paused the movie to make the aforementioned sandwich.

“Ah, Beefus,” he said, “I do think today was one of our cosiest days yet.”

We had an hour left before leaving for a $5 white elephant party in Brooklyn. I remarked that I was glad, despite the internal cosiness of the apartment, that we were going somewhere.

He went to make his sandwich. “Bacon,” he said. “We’re going for maximum cosiness, Beefus.”

It was endearing, as Tom can be when he’s enjoying himself. Which is why I remembered http://www.cosymoments.com and asked him about it.

For a moment it seemed I was dangerously close to letting the biting winter air into his bubble of cosiness.

“People need to mind their own business,” he hollered, heating up the pan, “That’s what’s wrong with this planet.”

“I told you about Cosy Moments, nobody else,” he said, slicing the bacon.

“You’re a menace and you need to be stopped,” he shouted, cutting into a fresh block of cheddar.

Soon, however, the sounds of sizzling bacon and the clattering of my resolute (albeit inconsistent) keyboard tapping filled the room. The smell of buttery, grilled bread began to mix with the still-there scent of our four-foot Christmas tree. Tom, if he had not forgotten all about it, had let it go.

I continued writing and in a few minutes the sandwich was in his hand, and then down his stomach. The upbeat orchestral sounds of Colonel Blimp resumed. We were back to maximum cosiness.

To enhance your own cosy moments at home, consider the following Tom-approved old movies on a cold winter’s night. Add bacon and cheese, wine and whisky, top with a wool blanket from England’s Lake District.