It’s 4:30PM here in Kaua’i and I’ve just come from swimming in the ocean, barely two shades darker than when I arrived. Mom on the other hand, due to some crazy tanning skills, is dark as a panther, even though she’s been wearing a long-sleeved linen shirt, long shorts, a hat, and holding my umbrella as a parasol since we got here. 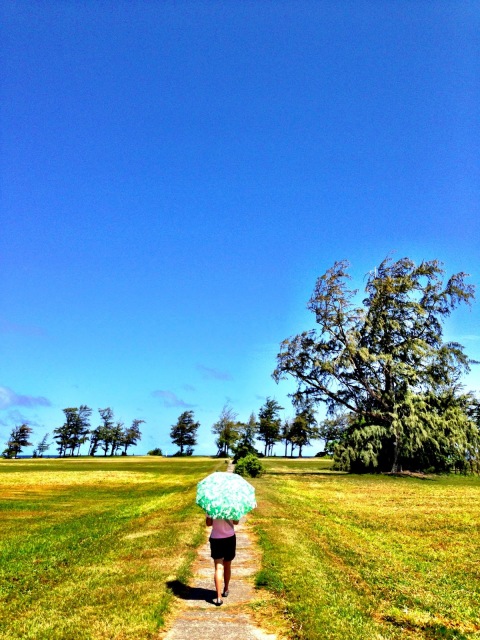 “I’m just dark,” is her response. She hates it, but then looks down at her brown ashy legs and shrugs, “Oh well. What can I do.”

She’s napping on the florid Hawaiian print couch in our hotel and I’m writing to you on the balcony, which is supposed to have a “garden view” but really just faces the neighboring resort which is undergoing construction. It’s hard work for these guys, but they get the ocean breeze, an awesome view, and they blast some KIIS FM stuff (so my jam) from a fuzzy radio, but they can only hear it when their drills and hammers aren’t going on.

If I tilt my chair to the left, I can see the ocean, which is right behind our hotel. It’s a cute place, definitely on the older side, but has separate living room and a full kitchen, which mom likes, a heated pool (though I think that’s unnecessary here) and hammocks hanging from the palm trees. Just a few steps away (God I sound like a brochure) is a nice stretch of beach, too rocky for some people but perfect for me and the other folks who swim with their head above water, that is, half-heartedly, because we’re not into snorkeling or scuba-diving, and who wants all that salt in their eyes? 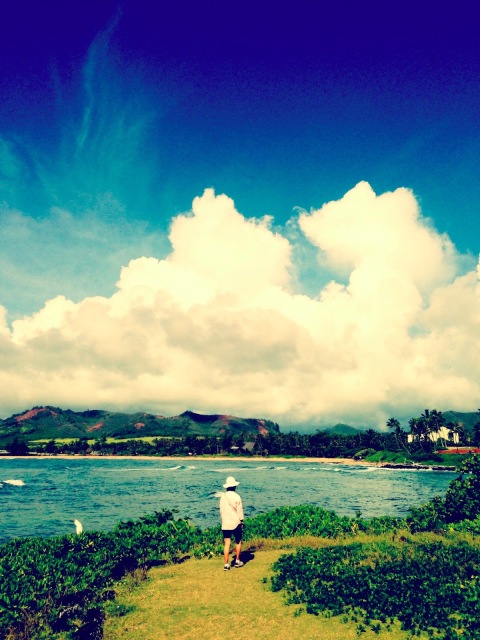 Traveling with mom is interesting. I’ve taken trips with just the two of us before, mostly destinations that were driving distance; we went to San Diego before I went to Berkeley and then to Napa while I was up there, but I forgot how much of each trip is just… driving and looking. Mom can walk for days, but she also walks very slowly (you know this) and needs good shoes or else she gets this glum look on her face, as though nothing in the world could make it right.

The first hike I proposed was just after a rain and the path was too soggy for her. She’d brought these shoes with holes on the bottom, which I told her were perfect for Hawaii and that she shouldn’t wear socks with them but she blamed me, saying that I had told her it wasn’t going to rain much. I told her it was hard to predict the weather, especially in Hawaii. She thought about this and decided to be unreasonable anyway.

“You said it wouldn’t rain,” she said. 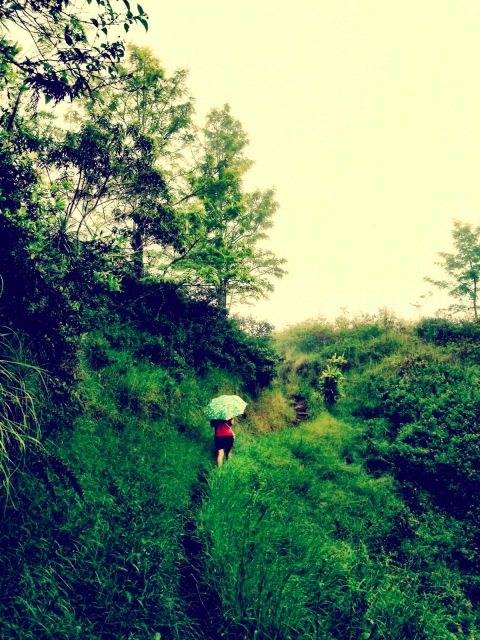 She was kind of a brat that day, but I got over it.

So basically we’re in scuba, snorkel, kayak, zip-lining and hiking capital of the USA but we didn’t do any of that, mostly because well, I’m not really into any of that either, but I’m kind of afraid of mom getting really tired or hurting herself.

This morning we went for a walk along the beach. I told mom to be careful because some of the rocks were slippery. I wanted to walk down near the water and she said she would too but she wouldn’t take off her shoes. I saw some interesting barnacles on a rock closer to the water and wanted her to take a look, thinking, I don’t know what, that maybe mom knew a ton about barnacles – God, barnacles! Of all things to risk your mother’s life for! – and she started towards me so I turned back towards the barnacles and suddenly I heard her cry out. I turned and there she was lying awkwardly between two jagged black rocks and I thought for a millisecond that I’d made her fall to her death because I wanted her to look at some goddamned barnacles. 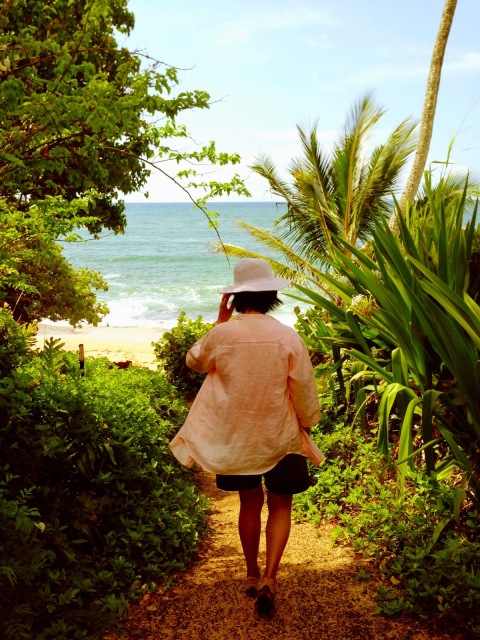 Her face was twisted up in a grimace and I was frozen there on the beach, not even moved by the waves hitting me in the back of the knees, my mind completely blank when she started laughing. I let out the hugest sigh of relief and rushed over. She nodded towards my camera and said, over the water which seemed to be moving again, “Did you get a picture of that?”

I didn’t (but I definitely thought about it when she started laughing) and asked if she felt anything amiss, bone-wise. She said, “Nope, thank God I have a fat ass.” 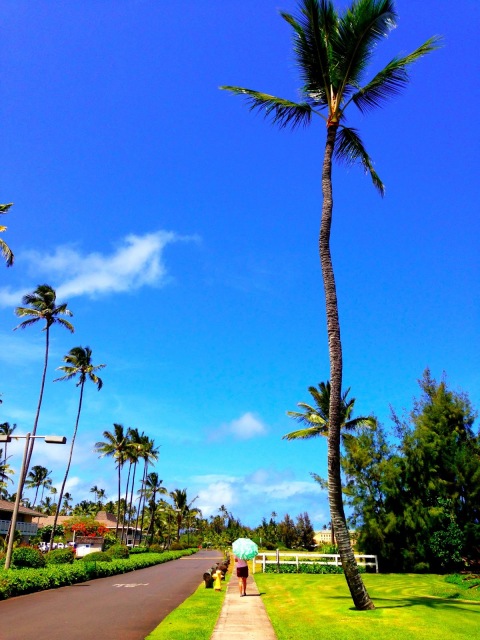 So mom is funny (though you knew that too). Funny in that she intends to be funny and also unintentionally. On the plane, she proved to be the most interesting seat mate I’ve had in a while – and I’ve sorted started this thing, writing about these seat mates because I’ve been traveling so much and have sat next to the some interesting people: e.g. Orthodox Jews who own their own printing company (they wanted to hire me onto their sales team), a girl named Leslie who was thinking about following her boyfriend out to California, and most recently, before Hawaii, a middle-aged authoress and HER elderly mother, both of whom were my worst nightmare. I still need to writer an essay about her, but let’s just say she wrote what seems like a terrible book and was telling me how successful she was until Border’s went out of business… I was like, “How come your book wasn’t anywhere else?” and she gave me this really irritated look like I didn’t understand anything about publishing and said, “Well, it’s on Amazon in digital format for $1.99.”

When the sandwich cart came she pulled out her credit card and asked her eighty-year old mother what she wanted and when the old woman told her, she said, “Well, Ma, get out your credit card because you have to pay for it.” I was incredulous, but then remembered that her book was selling for $1.99 and I probably didn’t need to ask her how the sales were if she couldn’t afford to buy her mother a sandwich. Oh man. Knock on wood so that my own writing career will blossom and blossom for decades.

Anyway, Mom though – she couldn’t sleep on the flight over and ended up just counting fat people on the plane, chuckling a bit to herself whenever a fat guy or woman got up and walked around or asked for another beer and soda.

“Look, look, this fatty is getting up to exercise.”

“Look, he’s getting another beer. See, Betty, every fatty is fat for a reason.” 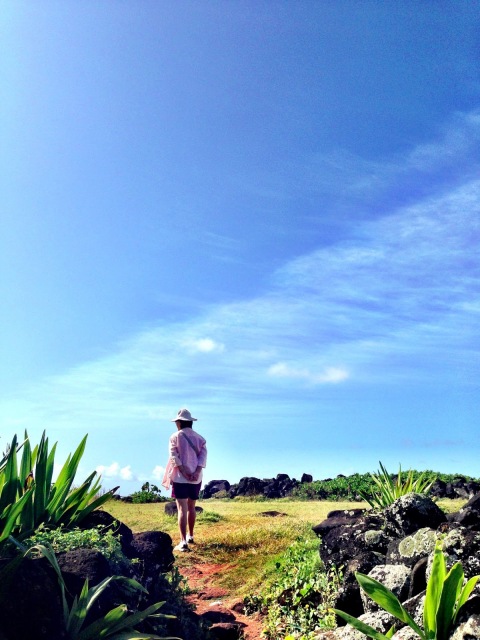 I laughed out loud so many times during the flight people trying to sleep around me were probably getting irritated. And it was so funny, to see how childlike mom could be: when the beverage cart came around she asked first for a glass a milk. Milk! And then for a glass of orange juice, two things she never drinks when she’s at home but 40,000 feet in the air it’s totally okay.

And the fruit. Dude, woman eats two to three whole papayas a day, plus bananas and lychees. She was a bit miffed at the entire island of Kaua’i because pineapples aren’t as cheap as she thought. I think she imagined these bounties of fruit falling out of the sky, or just cartloads of fruit outside the hotel for 50 cents a pound, but yeah, the local stuff here is kind of expensive, but mom was like, “Okay, I’ll shell out for papaya.”

But with pineapple she was more reluctant because dad’s not around to cut it into bite-sized triangles. 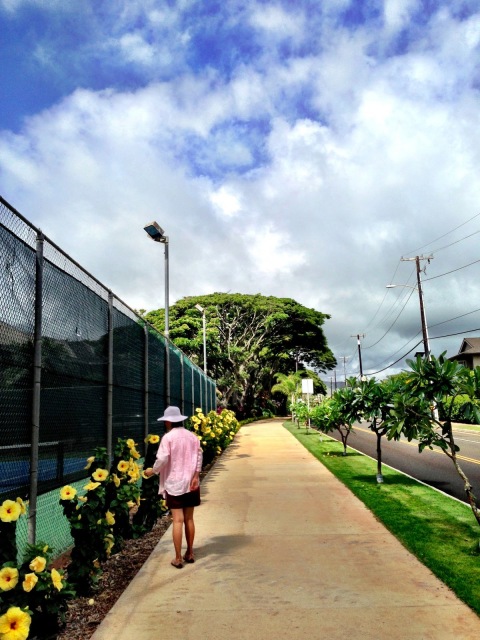 I get the feeling that she’s just not paying attention. I’ve heard her take a few calls from prospective students and I realize how hard mom and xiao jiu work to keep the Chinese school going, and how much of a headache it all must be, but because she believes in it, she keeps at it. Anyway, these calls tell me that mom is actually really on top of her shit in regards to the things that matter to her, and not that coming to Kaua’i with me doesn’t matter, but she doesn’t have to do anything in terms of planning, because she assumes I’ll be the tour guide and arrange everything, including drive her ass around to all these points which she sometimes doesn’t even get out of the car for, and…well, I do it because it’s in my nature, and it’s fine. 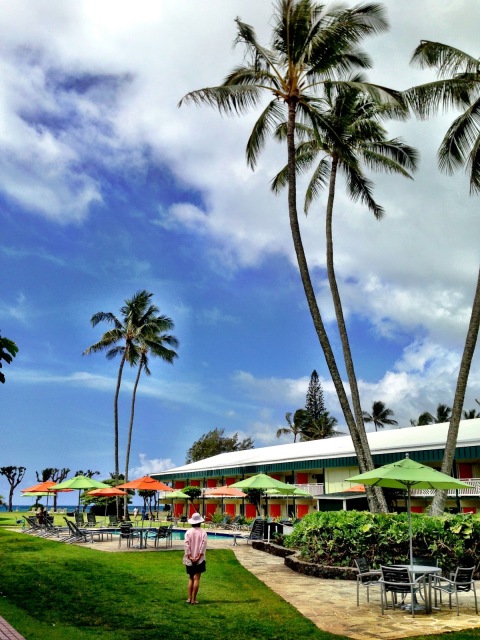 The most hilarious thing: is she is dyslexic for sure, and I think I might have inherited some of that. I get all mixed up about Chinese phrases and it’s the same for her, but in English. You know how she used to always say “May Robinsons” and “California Chicken Pizza” for CPK? Well, there’s a dish here called poke, which is basically sashimi marinated in sea salt, soy sauce, sesame oil and seaweed. Mom really likes it so I ordered it a couple times at various fish markets. She always goes, “Get the Polka Dot?” with a question mark because she knows she’s saying it wrong but can’t be bothered to knock off a few extra letters. I always want to tear my hair out. “Mom, it’s POKE!” pronounced “poh-kay”, I’ll say, and she just laughs, closes her eyes, shakes her head in that way.

“Oh, what are you going to do about me?”

Nothing, really, but buy the poke. But it’s been a good time. We’re going to get some Barbecue now for our last meal in Kaua’i and I gotta run out and pick it up.

Anyway, that’s my little update: telling you things you already know about mom. 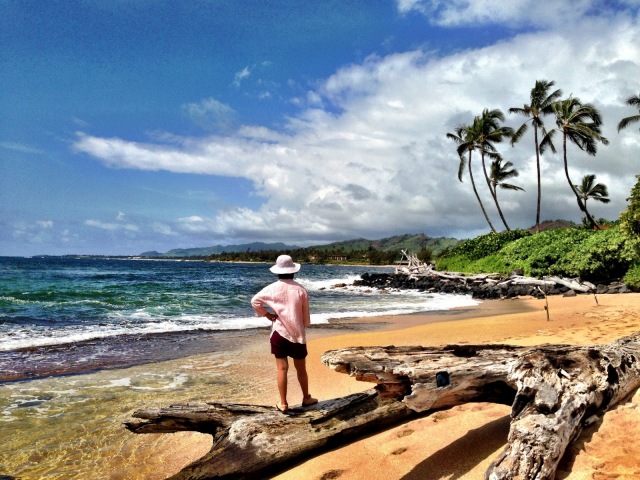