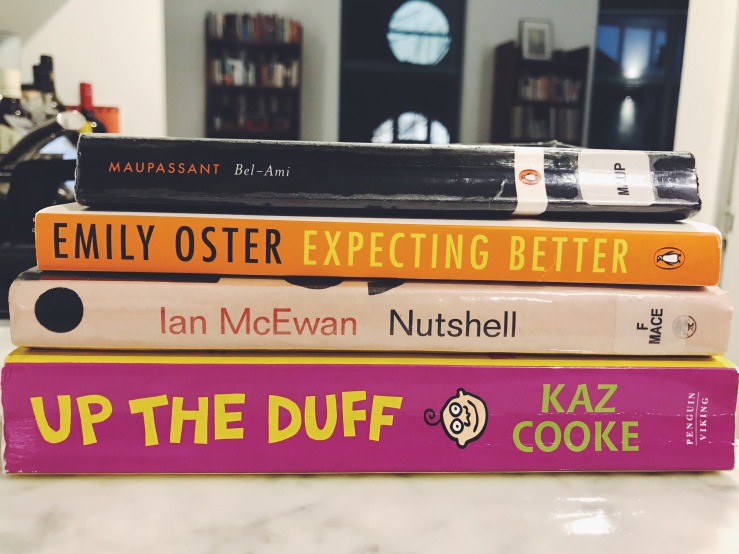 Before getting pregnant, I first had to remove the copper goalie in my cervix, which by the way, I highly recommend to those looking for hormone-free birth control. I did this in Washington D.C., a few months after our wedding, at one of OneMedical’s light-and-plant-filled modern offices. I met with a friendly, young female doctor who had no children herself, but who had done some reading on the topic.

“I don’t know why you would listen to someone who isn’t anywhere near having kids…” she started saying towards the end of my visit.

I pulled my pants up and looked at her. “Because…you’re…a…doctor?”

“Oh yeah, haha,” she said, “You just never know. With all the information people are getting from all over these days not everyone wants another suggestion or a book to read. But, if you’re interested, I highly recommend Expecting Better by Emily Oster. It’s the one pregnancy book I tell my friends and patients to read.”

I made a note and bought it later that day.

Oster is an economist who recently released her second book on parenting: Cribsheet: A Data-Driven Guide to Better, More Relaxed Parenting, from Birth to Preschool, already a New York Times Bestseller. I haven’t read that one yet, mostly because I think I’ve gotten the gist from podcasts and interviews with Oster, but yeah, I like her style and think her advice is sound.

“Pregnancy,” writes Oster, “suffers from a lot of misinformation. One or two weak studies can rapidly become conventional wisdom. […] In some cases, the existing rule is wrong (e.g. dyeing your hair is fine). In others, it isn’t a question of right or wrong but what is right for you and your pregnancy.”

For both books, she basically looks at a lot of data in the form of studies and draws approachable guidelines for women, encouraging readers to take “the information, the data, and combine it with your own estimates of pluses and minuses.”

I especially appreciated her approach to alcohol: 1-2 glasses a week in the first trimester is fine, as is up to 1 drink a day in the second and third trimesters. I read this and excitedly began to hit Tom on the arm.

“It looks like one or two boxes of wine can probably get me through the whole pregnancy.”

But since our little romp through France and Spain, with me unexpectedly still pregnant the whole time, Tom has placed a moratorium on my drinking anything.

“You’ve had your quota,” he’ll say, and return from the bar with a beer for himself and a club soda and lime wedge for me and baby. Yay. Bubbles.

I suppose it’s just as well. My hangovers were replaced by morning sickness, and when that passed, I slept for a precious two and a half months as I did before I moved to New York and made happy hours and boxed wine a regular part of my life: like a baby. Now the baby’s bigger and kicks harder. I’m also bigger, so sleeping comfortably and for long stretches is fast becoming a thing of the past.

But that’s fine. As I’ve mentioned in our sporadic newsletters, I’m reading more these days to occupy the time once reserved for happy hours and friends. And soon, as insomnia is starting to show its face more often, I’ll be reading well into the wee hours of the night as well.

Anyway, here are some recent reads I enjoyed, each answering a specific hope and dream for baby or pregnancy:

1. Nutshell by Ian McEwan
For those who hope their kids have an intimidating command of the English language. A murder thriller of sorts, narrated by a rather stuck-up sounding 9-month old fetus with a sommelier’s nose which he freely turns down on those who created him. My enjoyment of reading it could only have been heightened if I too, had been allowed a glass of wine while reading, especially during passages like this:

“I like to share a glass with my mother. You may never have experienced, or you will have forgotten, a good burgundy (her favorite) or a good Sancerre (also her favorite) decanted through a healthy placenta. Even before the wine arrives…I feel it on my face like the caress of a summer breeze. I know that alcohol will lower my intelligence. IT lowers everybody’s intelligence. But oh, a joyous, blushful Pinot Noir, or a gooseberried Sauvignon, sets me turning and tumbling across my secret sea, reeling off the walls of my castle, the bouncy castle that is my home…. But she never takes a third, and it wounds me.”

2. Bel-Ami by Guy de Maupassant
Great if you want to channel to your kid how to be a cunning and ruthless social climber and womanizer who will likely end up rich but deeply unhappy before dying of syphilis, as Maupassant did.

3. Up the Duff by Kaz Cooke
The livelier Australian equivalent of What to Expect When You’re Expecting (shoutout to Shelle and QB Jieh who lent me their respective copies!), but with worse illustrations that look like a local paper’s cancelled comic strip:

Apparently it’s so Australia-specific that it’s not sold on American Amazon. I know all the information is online and in handy-dandy apps, but sometimes it’s nice to just have a big fat book to sit down with and flip through. I liked the diary-entry parts and find the Australia healthcare system-specific tips helpful.

That’s it for now. I have 14 more weeks of reading ahead before the ol’ Scorpio arrives. If you have any recs, parenting book or not, heave them my way.