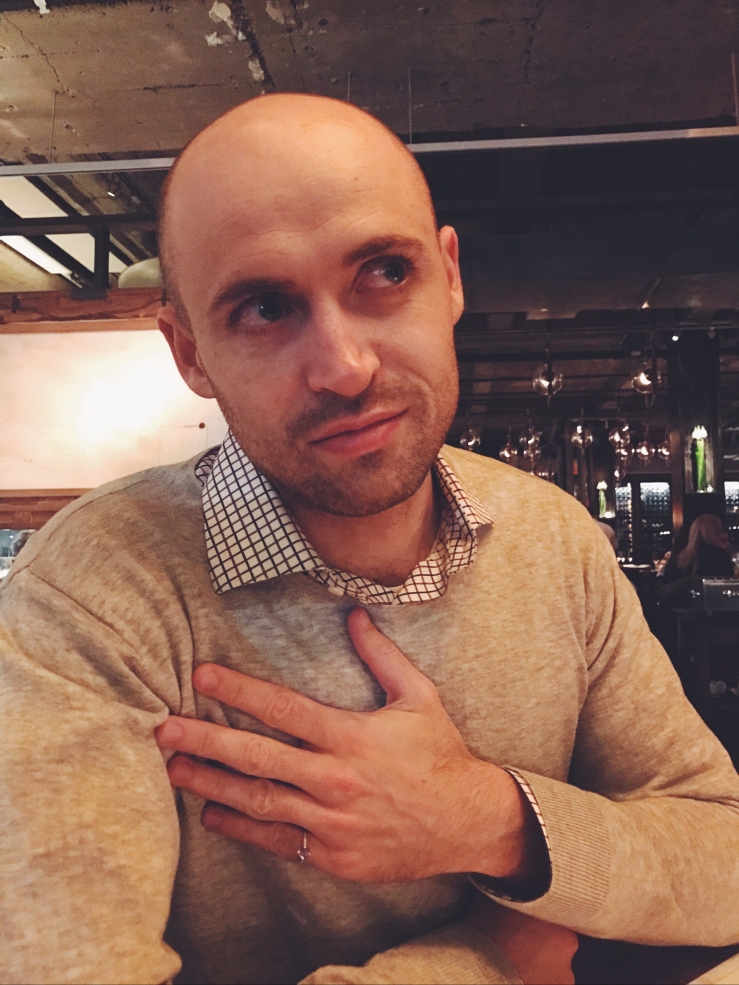 If you ask Tom, the day didn’t become nerve wracking until after noon. By then, I’d helped him cut his hair while he stood in the bathtub. I also asked him to vacuum.

“Not just the rugs,” I said, “The whole apartment. Even under the bookshelf and media console.”

“Alright, settle down,” he said.

He vacuumed while I cleaned the bathroom and didn’t get too annoyed when I followed him around telling him where he’d missed a spot.

He made us lunch – a rich, homemade Japanese curry – and did the crossword while I mopped the floors.

If you ask me, it was a lovely afternoon, mostly because we had nothing planned, (which meant I didn’t have to change into pants), and the apartment was clean. We watched an episode of “Mad Men.” Afterward, I wrote emails, including one to Tom’s mom about a possible visit to D.C.

If Tom was shifty throughout, I didn’t notice. I also didn’t notice the tiny box that protruded from the pocket of his basketball shorts.

At 5PM I closed my computer. Time to think about dinner. I looked at Tom, who was looking at me.

A little strange, because Tom is mostly a beer guy.

“Really? A cocktail? Wouldn’t you rather have a beer?”

“I’m feeling cabin fever-y,” he said, “And I would like to have a cocktail.”

I didn’t have cabin fever because earlier, I’d gone to buy a sponge at Duane Reade on the first floor of our building. I have low standards when it comes to getting out of the house.

“You should have gone to Duane Reade with me,” I said.

Tom looked at me, “Betty. That doesn’t count.”

“Well,” I said, “If you want a cocktail, I guess I could do oysters. But I don’t want to spend more than a dollar per oyster.”

Tom patted the empty space next to him on the couch, “Come sit over here and let’s think of where to go.”

I groaned that because it was Sunday, getting dollar oyster happy hour deals was probably impossible. I also suggested that we text our group of friends that lived in Hell’s Kitchen.

Tom was hesitant, “I think it’s better to have it be just us.”

“What about Kris?” I said, thinking of our friend one avenue away, “We never see him! Let’s just ask him!”

“Eh…it’s Sunday. I don’t really want to talk to anyone.”

“Okay,” I said, and we thought some more about where to go. At least I did.

“What if we went somewhere nice?” Tom said.

“Really? At a nice place the oysters are probably going to be more than a dollar.”

“That’s fine. What if we went somewhere classy and got a bit dressed up?”

This was also out of character. Tom’s favorite bars in New York are Mr. Dennehy’s and Daddy-O’s in West Village and Valhalla in Hell’s Kitchen. None are trashy, but none would qualify as “classy.” In the annals of Tom, his suggesting we go somewhere classy on a random Sunday night was as likely as his saying, “Let’s talk about our feelings.”

Suddenly the possibility hit me. Is he going to propose? Is this his plan? To get a bit dressed up, go to a random cocktail bar and propose?

No way. Almost jokingly, I said, “I really hope you’re not planning on proposing tonight.”

“Why not?!” Tom almost shouted. From underneath our couch blanket his other hand emerged, holding a little black box.

I stared at the box, then at Tom.

And for once, he wasn’t kidding.

Q: Did Tom get down on one knee?

A: No. We were sitting on the couch.

Q: Did you guys actually end up getting a cocktail?

A: Yes! Tom had made not so random plans. First, we went to the Blue Bar in the Algonquin Hotel, which Tom chose because as of late, I have been obsessed with Mad Men. Then we had dinner reservations at Quality Italian.

Q: Quality Italian? Is that some kind of fancy Olive Garden?

A: Not at all! Well…kind of. According to their website “Quality Italian is a modern take on the Italian-American steakhouse tradition,” so it’d be like if Olive Garden and Black Angus had a kid to whom they gave the best of everything and sent to Harvard Business School.

Q: And the dollar oysters?

A: We had oysters that were $3.50 each! As Tom said, “Get what you want. You only get one engagement dinner.”

Q: Your ring! Show us your ring!

A: It’s currently being resized as I was inexplicably bloated the day we went to finalize the design. But it’s beautiful, from Bliss Lau, and you can see a blown up version of it here.

Thanks for reading everyone. In case you’re wondering what Thom’s Thoughts were leading up to the proposal, read them here.