Tom is away this week on a business trip to San Francisco, a city we both like to shit on because it literally gets shit on all the time. Don’t believe me? Check out this poo map.

Despite the pain of being on a work trip in a “bum-ridden hell hole,” there are always upsides to being in California.

“It’s just lovely here,” texted Tom. I barely heard the phone ping over the din of yesterday’s torrential downpour. “Like 72 and sunny. I had to visit the Google office earlier, had free lunch outside overlooking the bay.”

I interviewed there once before, I said. I got a free bottle of water.

Also thankfully, Tom has friends there – the open-minded ladies who set us up, no less! –  Last night, he dined with our friend Amy at Mandalay, a Burmese restaurant which is, according to Amy, supposed to be less famous and but no less delicious than the legendary Burma Superstar. 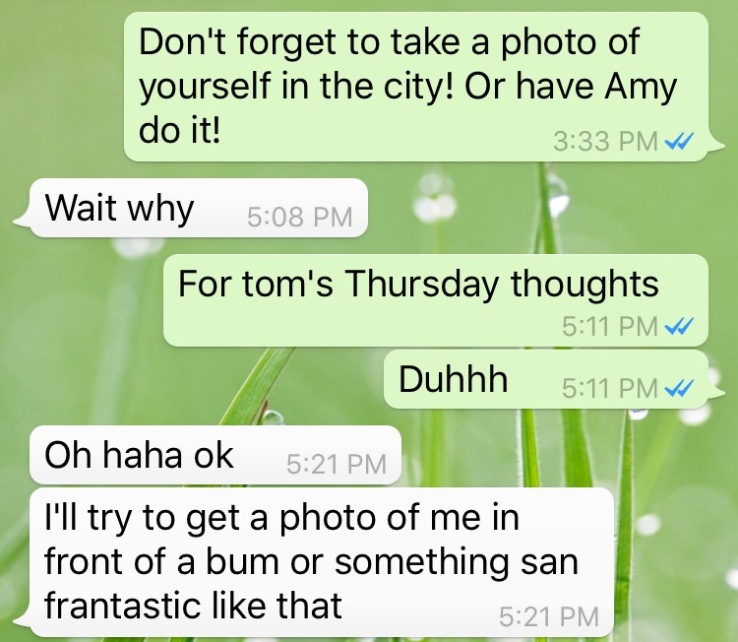 “How was it?” I asked this morning.

I reminded him about the photo.

“I went out of the hotel and there were literally seven bums in view,” said Tom, “But it was super obvious I was taking a selfie so I had to aim for bums across the street.”

A little while later, he sent the photo above.

He is staying in the Tenderloin, which, if you Google Image it, produces these results:

Happy Thursday 🙂 And sorry if you live in San Francisco.