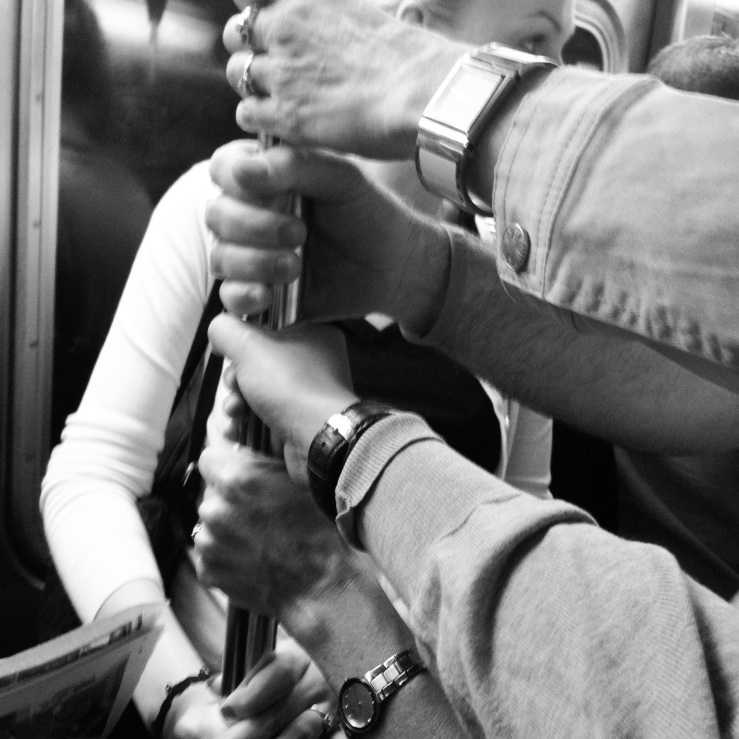 I forget where I was going. Downtown to meet a friend at a cafe or to run an errand just to get myself out of the house. Somewhere. But the train was crowded with people in thick coats and I was already pushed up against one of the poles.

An older man – not quite elderly – with a backpack, glasses, frizzy mad-scientist hair and large, staring eyes scooted towards me. His hands were rough – I know because he accidentally touched my hand when he reached for the pole. He scooted towards me, despite the lack of room to scoot.

I moved as far as I could to give him room.

“Thanks,” he said, “It’s just so crazy crowded. So crowded all the time.”

“Don’t you ever look around and wonder where all these people come from?”

I nodded, and because I am awful at ignoring the very people I should ignore, gave him a smile – I do this hoping people will take it as a polite, wordless way of saying “Shut up, you’re weird.” But as the point of smiles is to seem inviting, it never works. I must work on not smiling.

But I had smiled, so a minute later he spoke again.

“I mean, it’s the middle of the day. Don’t these people work?”

I smiled genuinely, because I always wondered the same thing. At home I felt like the only unemployed person in the world – at least the only person in the building at home to let the exterminator in during the week – but all I had to do was step outside in the middle of a crowded weekday, take the train or go to some cafe and find everywhere as populated as a busy office building.

The train lurched to a stop and a Hispanic woman’s elbow – luckily wrapped in a puffy down jacket – nudged the man’s glasses up. For a moment they were comically crooked on his face. He blinked, shook his head before adjusting them.

“I hate these damn things,” he said, “Don’t you just hate glasses?”

He had contact lenses but then lost them and hadn’t gotten around to replace them. But weren’t glasses were so damn fragile? You had to be careful.

“You can’t just leave ’em in your backpack. You have to protect them, you have to have the case and if you lose the case like I did, make sure they don’t get crushed. But of course there’s a million ways for them to get crushed….”

I could feel the thoughts of the people around us: “Why was she listening? Doesn’t she know he’s crazy? She must be from out of town.”

“….and once I was just walking down the street and one of the lenses just popped out. Just ‘pop!’ and I hadn’t even knocked into anything! Didn’t even touch them!”

For emphasis, he took off his glasses and showed them to me. They reminded me of the reading glasses my grandpa bought from the 99-cent store. Painted silver instead of actual metal. One of the lenses was extremely thick and the other of normal thinness. He was nearly blind in one eye. I noticed how mottled his skin was. As he waited for me to respond, his lips parted. The smell of coffee, cigarettes and imminent organ failure hit me like a slow fog. He was missing a few teeth, but he was clean-ish so probably not homeless. Not yet.

“Anyway, I should probably get contacts, but I just haven’t gotten around to it. And you know some people don’t like touching their eyes, but I got over it. Touching the eye. Makes some people squeamish but you get over it. You get over anything after a while.”

He looked at me and smiled, “Do you wear contacts?”

I do wear contacts- a special corrective lens called Ortho-K which I only wear at night. But this was not a thing to get into.

I nodded again, though I wasn’t.

“Well.” He tilted his head back and gazed at me with something like admiration. I gripped the pole. Everyone was a little crazy.

“I really ought to get contacts again,” he said, “These glasses…”

He took them off again to reconsider as the train lurched again. 34th St. Penn Station.

“I get off here,” he gave me a little shrug as the doors opened. A crush of people began pushing their way out and he seemed to be pulled reluctantly away. He tipped his glasses at me and beamed his broken, missing teeth.

“One of those New York conversations, right?”

I nodded again, smiled, and waited for the doors to close between us.

Also:
Moving In: A New York Memory
A Quiet Afternoon in the Lost Sock Department
The Unemployment Diaries