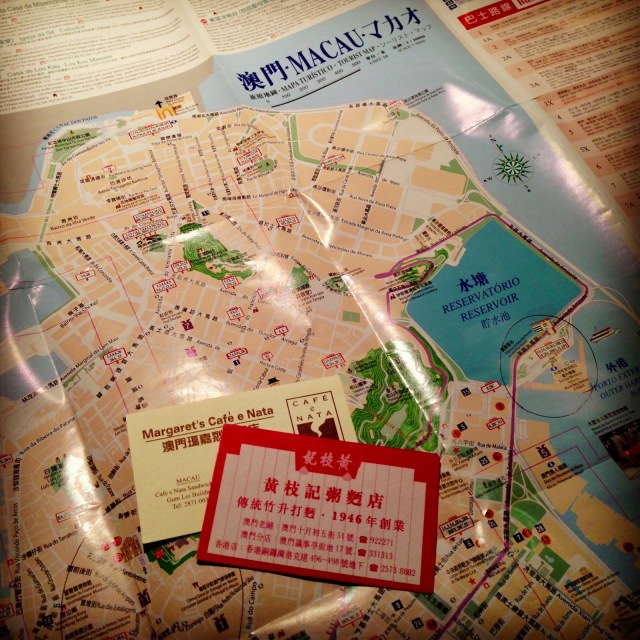 I didn’t know much about Macau. Admittedly, I still don’t. It just seemed like one of those places you try and make time for if you’re already in Hong Kong because, well, it’s there. My father, not a gambling man unlike most of his friends, likes it for the food.
“The egg tart place,” he said excitedly, when I asked him where I ought to take E and C when we visited from Hong Kong, “Let me get you the business card. It’s one of the best egg tarts you’ll ever have.”
I waited in the living room while he went to his study to retrieve the business card, and then to the garage, where he keeps outdated travel maps. My father is the epitome of homebody – he travels via television – but if he does travel he does so whole-heartedly if a bit blindly in the way men his age do, when they go to look but not to see. He becomes Uber-Tourist, hoarding free maps, business cards and trivia, and snapping photos all along the way with a camera that is usually much too complicated for his photos to reap full benefits. On a recent trip to Hainan island with my mother, my father clicked away furiously while my mother walked slowly behind him, pausing occasionally to sniff a flower or examine a leaf.
“Your husband,” the other tourists observed, “Is very busy.”
“Yes,” she said blandly, rolling her eyes at Uber-Tourist, “let him busy himself.”
Among friends, he is almost laughably, the “learned traveler,” because even though you can’t have a two minute conversation with him without him interrupting you ten times, he’s remarkably sharp and he pays attention. Uber-Tourist for sure, but in his defense a curious travler as well. We both like to pepper the locals – street vendors and cab drivers and the like – with questions about society. My father tucks the information away and recounts them verbally to anyone who will listen. I take mental notes and later, if I remember enough, blog about it.
He came back from the garage clutching a half dozen maps to his chest which he excitedly spread out across the table:
“Here’s where you want to go,” he said, pulling up a chair and motioning me to sit down, “I know you don’t have any interest in the casinos, but you can take the free shuttle buses into the Old Town…”
Thus began an hour long verbal tour of Macau via outdated map, interspersed with jaunts down my father’s lanes of memory in which he and his buddies were younger men who worked and played hard, drank like fish and ate like kings without worrying about cholesterol and heart attacks. Each trip to Macau, he laughed, meant they would lose money and gain weight, not the world’s worst trade off, he said, jabbing me with his elbow, unless you’re a young, single woman.
Times were different now: his friends all sported various diet-related illnesses and begged out of such trips or stopped planning them altogether. They ate light dinners, hardly drank, and went home early, as soon as dinner finished. They developed other interests and took different types of trips – in my father’s case, amateur photography and Hainan island with my mother, who can count the number of drinks she’s had in this lifetime on one hand.
The map my father now so fondly gazed upon was of Macau, but also a place of rowdy, raucous memories, and now his daughter was planning to go.
At the end of the hour, I concluded that my father and I were not so different, though he was perhaps more enthusiastic about egg tarts than I could ever be. He rather enjoyed, I was surprised to learn, walking around Macau’s old town and listed more restaurants than I could finish eating in a week.
“It’s not like Vegas,” he said, “The shows are not worth watching and the atmosphere is still kind of seedy,”
He looked quietly down at the map with a soft smile, “But it’s quite different from anything you’ve ever seen and a good place to go with friends. I think you will enjoy it.”
What follows are photos from the day trip I took to Macau with E and C. We did not gamble and set foot in a fantastically shaped casino only to use the restroom, among the gaudiest I had ever seen, with crystals hanging from bright chandeliers that cast a disco-club like glow over each toilet.
My father was right, it was very different. Not in a good or bad way. Just different.