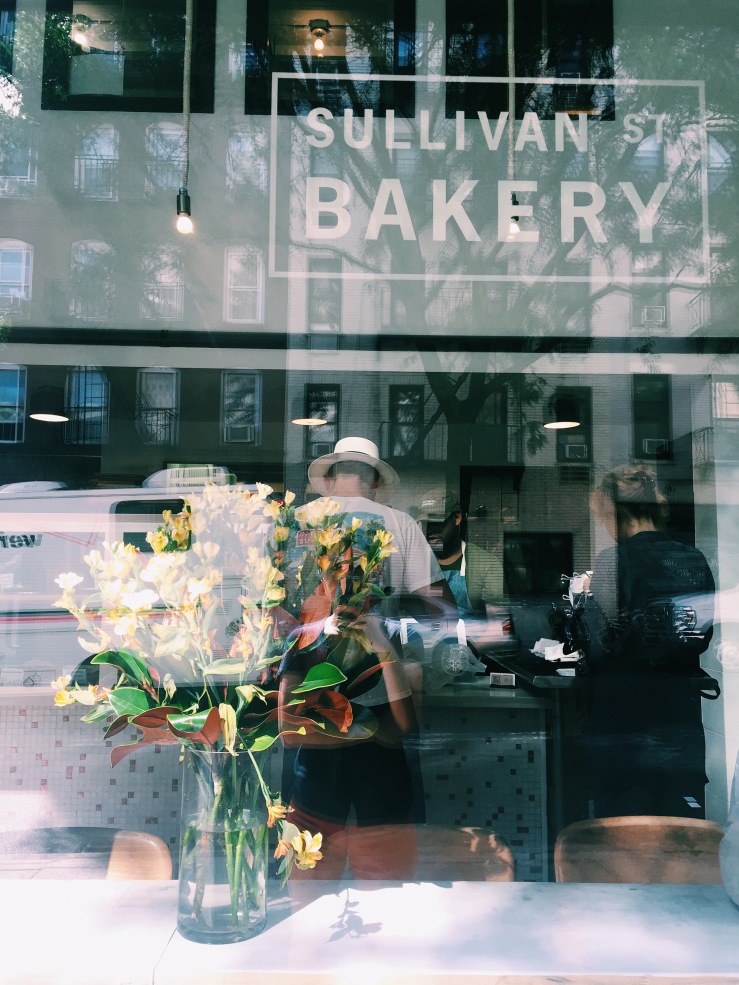 I worked from home today. I was supposed to go in after lunch, but right after turning in an assignment immediately got another. I reasoned to my boss that to spend thirty minutes on the subway only to sit down and do what I was already doing was pointless from an efficiency standpoint, so would it be alright if I just stayed home for the rest of the day?

I ended the email with “Thanks!” The exclamation point of which basically means, “How can you say ‘no’?”

Tom, with his glut of unused Summer Fridays (a New York institution that has yet to make itself into my British-owned company), was also home. At around 2PM we alleviated the cabin fever by taking a short walk.

We have very low standards for what it means to be “active,” and decided a stroll down to Sullivan St. Bakery on 47th St. and 11th Ave would suffice as an activity, outdoors. We bought a raspberry jam-filled donut and some Italian Danish (is that even a thing? I forget its name) and walked another avenue west to Underwest Donuts (located in a car wash) where a rather plump girl with Harry Potter glasses, sensing we would be some of the last patrons of the day, gifted us two fresh donuts.

It was a pastry-filled walk. 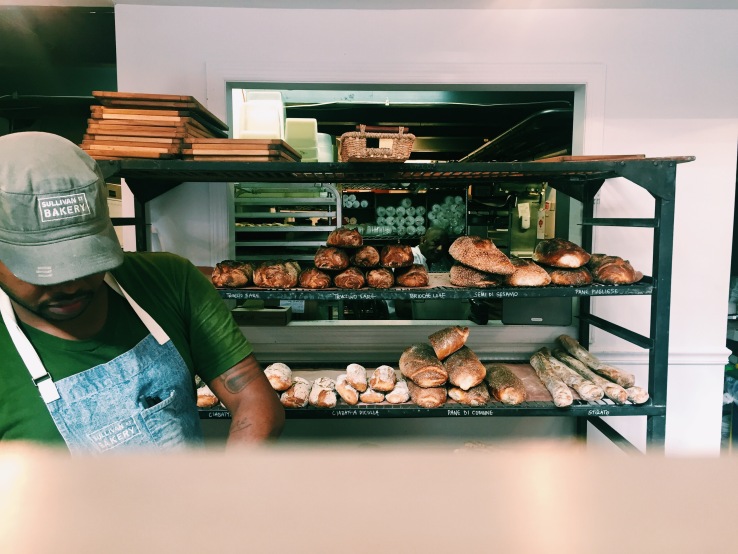 We sat at a picnic table near the Intrepid and watched other people not at work walk around with gift bags, debating whether to hail a cab back to their hotels. We ate our donuts and fantasized about a four-day work week (“I can actually go for a three-day work week,” Tom adds here), and whether opening a pub-like institution called The Salted Cod would do well. (We think so).

At four, we headed home, just in time for me to dial in a final work call, in which I learned an assignment I thought was medium-sized was actually very very large.

I apologized a lot for misunderstanding while the VP of Digital Things, himself just back from vacation, patched in a coworker in Bogota.

“I’m not annoyed with you,” the VP said, “It’s just…this thing is really fucking big. There’s a ton of work left to do. I probably should have been more clear about what the client’s expecting from us before I left.”

I nodded along, punctuated his exasperation with, “Okay, how can I help?” All the while my worry growing and the old (or perhaps relatively new) fear of getting fired creeping back in. An hour later, my ears burning from the phone, I hung up and looked around me. It was only 5:45PM, a still sunny afternoon in the last stretch of summer and yet I was already fretting about tomorrow.

Tom asked if everything was okay.

I looked around the apartment. The afternoon sun cast a balmy gloss across our wooden floors. Our house plants stood serenely by the windows and for some reason reminded me of my Grandpa Ho. The man who worried about nothing while everyone worried around him, for him. The plants were doing very well, especially the money tree.

The air conditioning hummed. The traffic on 9th Ave. began to grow loud and thicken like plaque in a fat man’s artery. My mind wandered from worry to things closer at hand – what were we going to have for dinner? Was the Italian Danish from Sullivant St. Bakery still good? Should we have it for dessert or tomorrow morning? Would Tom and I stay awake during the evening’s episode of Inspector Morse?

There was probably just another half hour or so before most of the office would leave for the day and really, what was expected of me in the next half hour, when my body wasn’t even at the desk?

I got up and closed my work computer. Heavy, burdensome thing, weighing down both body and mind. I suddenly regretted ever bringing it home. There’s something to be said about not working from home – the urgency and anxiety you’re meant to feel at the workplace should be kept at the workplace, rather than swirl around you like stale air in your place of rest and relaxation. I had blurred the lines today…but at least the workday was done.

I redrew the line, tucked the computer away. Whatever it was – the very very large thing or the small but endless things the make work work – could wait until tomorrow.