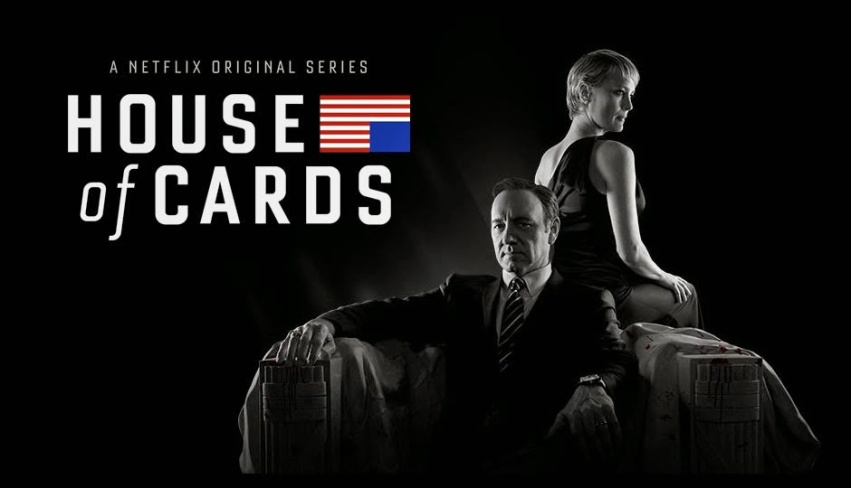 “I love that woman. I love her more than sharks love blood.”
–  Francis Underwood

I started watching “House of Cards” a few nights ago on a borrowed Netflix account (thanks, M) and am feeling, for the first time in a long while, “with it” on the pop culture front.

Except I’m on Season 1, Episode 7 and everyone else has already binge-watched and dissected Season 3.* But that’s just how I do groundbreaking TV shows, like Downtown Abbey, Dexter, Game of Thrones and The X-Files, the last of which which I became obsessed with in 2012, ten years after the last episode aired. I come to them years later and try to give my two cents when everyone else has already given fifty.

So, two cents: House of Cards is fascinating. If you watch it, you already know this, though perhaps we might not find it so for the same reasons. I didn’t watch it initially because I thought it was a political drama for which I wouldn’t be able to muster the interest to understand, even though Tom and a majority of our friends, along with the millions of binge-watchers raving on Facebook and Twitter and Instagram, watched it religiously.

“You’ll just have to watch it.”

Thanks but that doesn’t tell me much. And besides, I had boxed it up as a political drama and I’m about as apolitical as they come. Or careless, or unaware, or ignorant. Yeah, I’ll be the first to say it. When people were talking about ISIS I said, “The Egyptian goddess? What about her?” To those who love me and say, “Don’t ever change,” don’t worry. I won’t. There are only so many hours in the day and I allot them carefully to reading timeless books, writing this blog, and cleaning my apartment. I also voted for Nader because I thought he would plant more trees.

It wasn’t until my cousin M, with whom I can speak for hours on end about relationships and marriage and the endless compromises and understandings required to make them work, specified that the show was riveting to her and would be to me for a different kind of politics, that I decided to give “House of Cards” a shot.

The marriage, she said, if for nothing else, watch it for that marriage.

So I did and I’m hooked. Now that I’m kind of part of the dialogue, I’m devoting this Sunday’s Seven to Claire and Francis Underwood’s marriage and how they’re redefining what it means to be both a “power couple” and “happily” married.

1. For starters, check out the Underwood’s guide to a happy marriage, in GIFs.

But do the Underwoods actually have a happy marriage? Below, three writers (who don’t appear to be married) nod fervently.

2. Lauren Martin of Elite Daily explains Why Claire And Francis’ Relationship On ‘House Of Cards’ Is The New Gen-Y Standard.

3. Benjamin Solomon a writer for Swimmingly says straight up “Why I Want a ‘House of Cards’ Marriage.“

4. And Karley Sciortino tells Vogue why “Frank and Claire Underwood Are [Her] New Love Role Models.

5. But I appreciated most how Hanna Rosin (author of “The End of Men”) dug deeper into the issue in this article for Slate (warning: this article contains Season 1 spoilers).

“Under the terms of the Underwood marriage, an affair does not count as the ultimate betrayal, but upsetting their delicate balance between separate and apart does.”

6-7. Perhaps Claire and Frank are merely practicing Dan Savage’s “monogamish,” which marital psychologist Esther Perel calls, “the new frontier” in this interview with Hanna Rosin for Slate’s DoubleX blog:
Slate: Will future arrangements look something like the Underwood marriage on House of Cards, where their non-monogamous arrangement is understood between them without being explicitly discussed?

Perel: The Underwoods are totally seen as a power couple. People do not see that they have a profound sense of intimacy. But their intimacy is about how each one supports the other in their own pursuits. So it’s an intimacy based on nurturing differentiation. We are there for each other, to help each of us be who we want to be. And one of the important axes in any relationship is how the couple negotiate togetherness and separateness. The ability to be myself in your presence versus having to let go of parts of myself to be together.

Regardless of where you stand, a ‘House of Cards’ marriage is definitely something to think about but – a bonus link! – if you feel you can’t learn anything from the Underwood’s marriage, then at least take away 15 Other Lessons Learned from the show’s brilliant writing.

*Though I did glimpse a few Tweets about Season 3 and apparently it’s getting weird. (Shakes head). Why, after all these painful last seasons of shows past, hasn’t Hollywood learned its lesson yet? Know when to stop a good story people. Don’t ruin the the arc. But it doesn’t yet matter for me, as I’m only just starting to climb the hill. (Get it? Get it?)